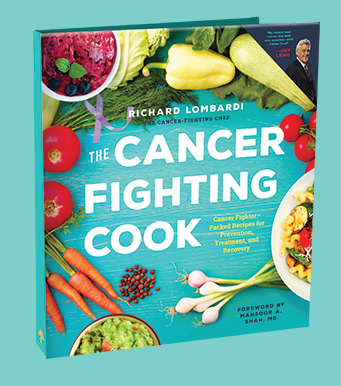 The Cancer-Fighting Cook Cookbook features a variety of recipes and heartwarming stories from Chef’s around the world. Each flavorful recipe includes a specific caner fighting ingredient to help provide patients with the necessary nutrition they need before, during and after treatment.
As a cancer survivor himself, Richard Lombardi has created this cookbook to help patients and caregivers prepare nutrient rich recipes that combat the symptoms caused by treatment and enhance the recovery process.
Each delicious recipe includes a specific cancer fighting ingredient and provides nutritional information. We’ve also included helpful hints, kitchen basics and a removable list of beneficial ingredients for quick reference.

All recipes included in this cookbook come from Richard’s own collection and professional chefs from around the world. They have shared these recipes and stories in hopes of providing savory meals that truly help the healing process and to encourage patients throughout their cancer journey.

When you learn the art of sausage stuffing and mozzarella shaping at a young age, it must mean that you’re cut out for a life as a Chef. He has been a professional chef for almost 20 years. Chef Richard has been learning and perfecting his cooking skills since he was a child.

His first kitchen job, at the age of 5, was to take freshly made ravioli from the kitchen to lay them out to dry on a white sheet on the bed, the largest flat surface in the house. He graduated to working Saturdays at Uncle Mario’s Italian Deli in the Bronx, New York City.

In 1988 Chef Richard began his professional cooking career by creating portion-controlled entrees for patients needing to control their eating habits due to medical problems. This led to his taking over the production of the Bristol 300 line of low calorie products for Bristol Farms Stores. For over 5 years he supplied Trader Joe’s stores with fresh Italian entrees.

Chef Lombardi has created a “New Italian American Cuisine,” as influenced by his mother Mama Rose, his aunts uncles and grandparents. “Quick, Easy and Delicious” describes the “New Cuisine” and Chef Richard takes the mystery and hard work out of preparing great food for you and your guests.

Chef Richard and his wife, Elaine, owned and operated Mama Rose Restaurant, in California, for 10 years. During that time the restaurant and Chef Richard received many awards for excellence. They were celebrated in newspapers, magazines and on radio and television for the extraordinary dining experience Mama Rose offered.

Chef Richard has written numerous articles for food publications and “The Mama Rose Cook Book” containing recipes from Mama Rose Restaurant. After his bout with CANCER he created a non-profit organization “The Cancer Fighting Chef.” He is using his cooking experience along with his experiences as a cancer patient, to create tasty recipes that contain ingredients that help fight cancer.

Many chefs around the world have visited his website and asked Chef Richard “How they can help?” An affiliated organization was formed called Cancer Fighting Chefs, International and Chef Richard’s effort is now a world wide effort by thousands of chefs who have become advocates in the fight to prevent CANCER.

There are no reviews yet.

Be the first to review “The Cancer-Fighting Cook” Cancel reply